US to form ‘core coalition’ to fight Isis militants in Iraq 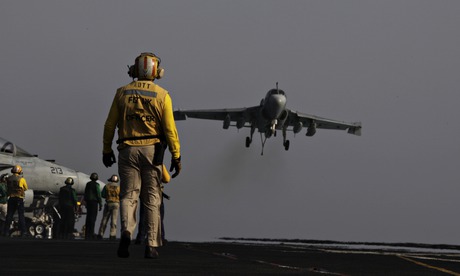 An F/A-18C Hornet lands on the flightdeck of the US navy aircraft carrier USS George HW Bush after flying missions over Iraq. Photograph: Hasan Jamali/Edos News

The US has announced it is forming a “core coalition” to battle Islamic State (Isis) in Iraq, and has given the new bloc two weeks to finalise plans to help the Baghdad authorities and the Kurds in the north intensify the fight against the militants.

Speaking at the Nato summit in Wales, the US secretary of state, John Kerry, said on Friday that the 10-nation coalition would concentrate on shoring up those in Iraq who were fighting against Isis, but said intervention would not extend to western powers sending in troops.

“We need to attack them in ways that prevent them from taking over territory, to bolster the Iraqi security forces and others in the region who are prepared to take them on, without committing troops of our own,” Kerry told a meeting of the 10 nations that will form the coalition. “Obviously I think that’s a red line for everybody here: no boots on the ground.”

He said the grouping should come up with firm plans by the time the UN general assembly meets for its annual session later this month.

The 10 nations are the US, Britain, France, Germany, Canada, Australia, Turkey, Italy, Poland and Denmark. Significantly, the group does not include any Arab nation and only one of Iraq’s six neighbours.

The US has launched more than 100 air strikes on Isis positions in northern Iraq in the past month to try to check the progress of the militants, who have seized a vast swath of Syria and Iraq in the past few months.

But Pentagon officials have said that this military engagement will only contain the Isis advance, not defeat them, and that a broader strategy and alliance is needed.

The decision was made at a joint meeting of defence and foreign office ministers chaired by Kerry and his British counterpart, Philip Hammond.

British sources stressed that no request was made by the US at the meeting for the UK or Nato to carry out air strikes. But the agreement of the 10 to attend the meeting under a Nato umbrella is considered a sign that a strong military component is being planned in the campaign against Isis.

“The meeting was Nato countries coming together to see, particularly on the diplomatic and political front, how we put together the best support for the countries in the region,” a spokesman for David Cameron said. “It is a politically led strategy and no commitment to military action has been taken.”

He stressed that the next stage of Nato support to Iraq – helping to train the Iraqi armed forces or to supply arms – was dependent on an effective, permanent, inclusive government in Baghdad. The British government also emphasised that the next political stage would be the meeting of the UN general assembly, due to be attended by world leaders including Cameron.

It is likely the core coalition will put together a UN resolution endorsing military and political support for the Iraqi forces trying to oust Isis. It remains unclear whether there will be any mention of Syria at this stage, an issue that is likely to cause difficulty for Russia, a permanent member of the UN security council.

Cameron was due to discuss the issue with the Turkish prime minister, Ahmet Davutoğlu, on Friday afternoon and has already made a commitment to a training mission to help Jordan.

She said: “The countries that have expressed a willingness to tackle Isil head-on have also looked at what more can be done in terms of air strikes and Australia will respond when a formal request is made.

“The red line is combat troops on the ground. There is no interest from any country present to commit combat troops,” she said.

'boots on the ground' at meeting of 10 nations of Nato on sidelines summit US secretary of state John Kerry rules out committing 2014-09-05
+Edos
Share !

Am a Web designer a video and sound engineer and also a movie and sound director. thanks for visiting my site promise to bring you the latest update all over the world visit the rest of my site electionnigeria.com installmycctv.com edosnews.blogspot.com

PM Narendra Modi arrives in Myanmar, to step up engagement with ASEAN

Warning: Unknown: Failed to write session data (files). Please verify that the current setting of session.save_path is correct (/tmp) in Unknown on line 0